Our next day began with us preparing to build some benches for the Success Ministries children. 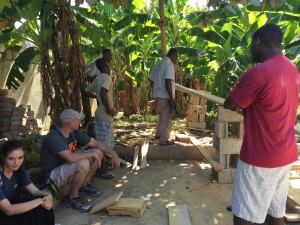 We were able to hire a local carpenter and we walked to a lumber store down the road. Lumber in Haiti is a little different than America. Most of Haiti has been deforested, so most of the construction grade lumber comes from The Dominican Republic. Since it is an import item, the costs are actually very steep compared to running into our local Home Depot here in Texas. For example, an 8 foot 2×4 only costs us about $1.50 but at this store they wanted almost $12.00 for it. We ended up purchasing enough lumber to build twelve six-foot benches with desktops.

This much lumber required a truck to bring it back to the courtyard where the children eat each week. We began to assist the carpenter only to learn that our American ways were not very compatible with their skilled carpentry methods. All the lumber was cut with a hand-saw, planed, and nailed. The Haitians are very proficient with a hand-saw. We were all very impressed to see the carpenter split a 14-foot 1×10 into thirds just using the handsaw. At one point he let Jereme give it a try only to stop him abruptly when he veered slightly from the line marked on the plank.

Praying at the Well

After conceding to let the Haitians do their thing, we got out of their way and went on a prayer walk to witness to the locals. This was a very productive walk. We ended up at the local well where women and children were collecting water. We helped pump water for them then discussed Jesus. We prayed for several families that happened by. There was this sense of familiarity with Jesus in this ministry as we thought of the Woman at the Well story. So many huge things happened at wells in the Bible and it was very moving to be able to help people and pray for them as they came to the well. Kevin filled one little girl’s water bucket so full she could not lift it and she motioned for him to put it on her head. We watched in fascination as she walked off effortlessly carrying almost 50 pounds of water on top of her head.

We then met a family who had just lost their father. Many people were visiting in his honor. The woman of the house, Annette was there with her niece (a three month old baby) who was sick and hungry. We prayed for her and the baby. While doing so one of the local men was moved by the prayer and fell onto his knees in the middle of our circle with his hands raised. When we had finished he asked if he could have prayers too. He said he was not a follower of Jesus but wanted our prayers. After praying for him we encouraged him to accept Jesus. Some of the locals will help work with him on his faith. My hope is that the prayers will be answered and drive him into the arms of Jesus. We told Annette that we wanted to feed the baby and that we would return with baby food and formula. 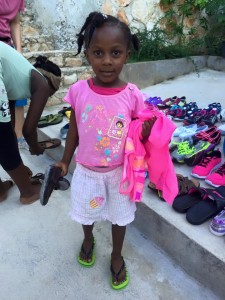 Once we got back to the house we began preparing for the Success Ministries children who were instructed to come get shoes and clothes. Over the next few hours were were bombarded with kids. Over 100 of them got shoes and clothes. We also got new pictures of them for the Footprints of Charity Child Sponsorship Program. It was so great seeing kids show up with torn and rugged shoes only to leave in new Nikes and Crocs. This time we even had some brand new socks for many of them. The terrain is so rough there, shoes are always in great demand. In addition we had enough clothes to provide almost all of the children with a new outfit or at least a shirt to wear. The kids were also great when taking their photos. They were all very respectful, honored, and thankful.

Finally, we helped Pastor John with his English Class. This was happening simultaneous with the shoe distribution. They would finish with us, then go to class. Jereme and Kevin taught them the vocabulary words in the provided primer. These kids have come so far since we first started this ministry with them. They are learning English quite well and this will help them grow. Education is a key to the future of Haiti and these kids are on the path to the future growth and restoration of their society. It is so honoring to watch God work in the lives of these young men and women.

At the end of the day we were all overwhelmed with the happenings of the day. The carpenters were about half-way done with the benches and we took a much needed rest while Pastor John went to purchase the baby food we had promised. It is always so rewarding to feel like God has allowed us the privilege of making even a small difference in the lives of the least of these people. 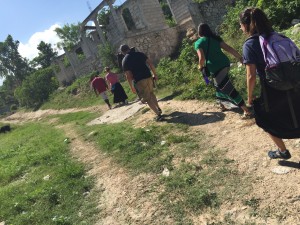 Shoes Before and After