Sorry it took me so long to get this blog out, but I was dealing with how to formulate my thoughts. Going to Haiti was quite an overwhelming experience, full of paradoxes, joy, pain, and empathy. The plan was to send small teams in for one week at a time to help a children’s home in Port-au-Prince. Now I realize why short trips are a good idea. The physical and emotional drain is quite heavy. It was a 10+ hour flight to Santo Domingo, Dominican Republic and then an 8 hour bus ride to Port-au-Prince, Haiti. Once there we were subject to hard work, in boiling heat while surrounded by poverty and destruction for the next few days. Then the grueling travel back. So why go? Why not cut a check and be done with it? Well, my heart has been burdened for these people for awhile now, even before the earthquake. I wanted to do more. Because those people need more. Sure money will help give them food, clothing, and shelter. But I noticed another need that money cannot fix… a need to be seen as human. A need to be remembered as a soul whom God loves and not just a number or a statistic. This is what I felt was the greatest need to fill. So I went with love in my heart for a people I had never met and it was rewarding to my spirit. I guess I needed Haiti as much as it needed me.

When I got there I already wanted to leave, but I then again I didn’t want to ever leave. It was really good getting to meet the people there. The people there at the Sonlight Children’s Home were absolutely awesome. I am convinced they are doing the only real thing that can fix Haiti. You’ve heard the old proverb of giving a man a fish and you feed him for a day? Well these people are teaching the Haitian people to fish.

The home is not your traditional orphanage. They are not looking to place displaced children. They are taking them in as a family and teaching them to serve each other and look out for the needs of others. The oldest boy, named Thomas is technically a man at age 23, but now serves as a patriarch of sorts and a leader for the younger boys. Those children are some of the best behaved, hardest working, and honorable people you could ever meet. Everyday they do their chores, conduct school (the older ones teach the younger ones), they all help in preparing the meals, and after each meal they have a devotional and singing. All of this happens under the guidance of one woman named Roberta Edwards, a remarkable and resilient woman.

I spent most of my time helping clear rubble from the fallen security walls that fell during the quake and repairing the road outside with it. One child was killed by the falling walls. Roberta was gone to the States at the time. The older boys took charge during the crisis and led the others. They then pulled the dead boy from the rubble, dug him a grave in the back of their property, and conducted a funeral service for him. Amazing maturity and resolve for their age. 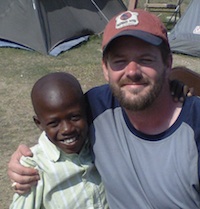 By the end of my first day, every time I lifted that 16 lb. sledge hammer it hurt. This day helped established my relationships with my co-workers as well as the boys from the Home. One stand-out was a child named Mordecai who probably weighed 60 or so. He worked with us almost all day, pushing wheel-barrows full of rock probably twice his body weight, trying to use the hammers, and putting his machete to good use on some brush we were clearing. He took a shine to us and didn’t want to leave our sides.

Another young man whose name sounded like “Wonfadda” (maybe someone will comment with the correct spelling) also stood out as a very young, hard worker. At the end of the day he came up to Ashley and myself to tell us we were done for the day. As we were walking toward camp with our hammers on our shoulders, he grabbed us both at the same time around the waist and hugged us tight. Such was his nature. A couple of times during my stay he held my arm as I walked from one place to another.

There was so many amazing things happening around us, you could just see God at work. One day Tim, Megan, and I went to the St. Francis Hospital in downtown Port-au-Prince. Tim is a nurse and so we thought we could do some good. We were envisioning mass hysteria, gangrenous wounds, amputated limbs, and the smell of death. So although I have no medical background, I figured in that type of situation another set of hands could be good. (That and support through prayers.) However, we got to the hospital to find it calm and organized. There were teams of medical personal trotting around in uniform scrubs, partitioned areas with beds, and no screaming or crying. Tim asked the team if we could assist and we were summarily dismissed because we did not have the qualifications they required. Megan called us SUVs (spontaneous untrained volunteers). Tim did not have his license with him so he could not help either. So we are now feeling like we just wasted a couple of hours traversing the messy PaP streets when suddenly God stepped in. Tim asked the team if they had Tetanus vaccinations (which are really rare over there) and they had over 40,000 and were willing to let us have enough to inoculate the whole Children’s Home. Funny how these things work because our buddy “Wonfadda” had just stepped on an old nail the day before. I stand in awe of our God.

It was tough seeing the devastation in PaP. Everywhere you looked there was destruction, tents, lean-tos, and people waiting to get help. These people had so little to begin with. The quake took an astronomical toll on them. It is hard to even fathom. The language of Haiti is Creole and very few speak English, however at one point as we were riding in the truck, the traffic came to a halt. Tim was saying “bonjour” to people on the sidewalk as we creeped by. Then a young man in his teens looked at us, put his hands over his heart, bowed slightly and said in very plain English, “Thank you… very much”. My heart sank. This young man didn’t know us or what we were doing, yet he felt compelled to thank us. Why? Because he knew we were foreigners in his land brought here not by tourism, but by our concern for him and others. This has a huge impact on the human spirit: just to know that someone cares about you and people are willing to leave their comfortable homes even for a short time to help.

Then it was back to the hard work. I could really tell how sedimentary I have become in my nice house and office eating my fill and sucking down sodas. I needed this. I did do a little diagnostics on some dusty old laptops for a few of the locals as well though. And the Blue Screen Of Death looks just as bad in French 🙂

We had a near fatal accident at one point as an absolutely huge steel gate with spikes on the top fell, just raking the back of one of the workers as he stepped away. Again I see the hand of God, because a half of a step slower and our friend’s back would’ve been ripped to shreds.

Finally as I was preparing to leave, a local man came up to me. He introduced himself and wanted to talk. He began to recount his experience in the earthquake. He lost his home, but thankfully his family is ok. He moved them out to the countryside, but still needs to be in the city to help so he’s been staying in his car inside of the orphanage walls. He was very kind hearted and was anxious to hear about my life. I felt almost ashamed to tell him of my blessings. As I told him goodbye, he took my hand in both of his and pulled me close. He looked me in the eyes and asked in broken English, “Will you remember me?” In return, I grasped his hand tight and reassured him, “Don’t worry, I could never forget you.”

And I never will.

This was my lesson from Haiti: loving people is more than a check in the mail. It is comforting them when they feel lost and alone. When it feels like the world has forsaken them, they need to know that there is a love unlike any other. Agape… the willing and unconditional love. The love that extends past feelings or emotions. The love that sacrifices for those you’ve never even met. The love of a Savior. After all that’s what Jesus did for me and I could never repay that debt. All I can do is pay it forward to others. Some of the least of these are definitely in Haiti.

Please continue to pray for Haiti and the relief efforts there. Long after the cameras and the media are gone, broken lives, hunger, and spiritual needs will continue there for years to come.